Before we launch into the review…in my SIG P320 review, I don’t know if it was my phone or if it was WordPress, but every instance of X.D. was changed into an emoticon. Thus, even though Springfield markets the pistol without abbreviation periods, I shall be using them for clarity purposes.

With that out of the way, the Springfield X.D. series of pistols tends to stir up debate amongst gun owners. Its proponents swear by them up and down, citing their reliability, ergonomics, and, in the full sized versions, its magazine capacity. I can’t find the advertisement, but when the X.D. dropped way back when in the early 2000s, I remember seeing an ad in either Soldier of Fortune or a gun magazine that bragged how it carried a then-near unparalleled 13 rounds of .45ACP.

On the other hand, many have criticized its grip safety as an unnecessary impediment to firing and potentially a factor that could cost someone in a time-is-life situation. They see nothing special about the X.D. that can’t be found in other striker-fired pistols. These are criticisms I often see from fellow Glock carriers.

I wanted to choose for myself, and I was doing research into striker-fired .45 handguns when I saw that an X.D.S. in .45ACP was available. I decided to give it a spin.

Out the gate, I noticed that it was extremely ergonomic. It also had a fiber optic front sight, which helps with target acquisition. It’s extremely concealable, as well. I could have easily stuck it in my pocket without anyone noticing were it my own (which I would not recommend without a pocket holster).

I had no trouble with the trigger pull, either. It was smooth enough with a pronounced reset. For that matter, I had no problem with the grip safety, either. I did not have a single failure to fire due to not gripping the pistol hard enough. Then again, I have large hands, so your mileage may vary.

Speaking of my large hands, I love the magazine extension. One of my gripes with my Glock 26 is that I had to purchase aftermarket magazine extensions so my pinky finger isn’t hanging off the pistol. Some people aren’t bothered that that, but I am, and that I was able to wrap my hand around the entire pistol grip with the extension in place pleased me.

Allow me to elaborate.

My first exposure to subcompact pistols came from my grandfather. I was in Florida, visiting my grandparents, when he decided to take us to the shooting range. His handgun of choice was a small Kahr handgun. I believe it was chambered in 9mm or .380. It had an extremely stiff trigger, and I noticed that it stung the palms of my hands after extended firing. I immediately learned that a handgun that size is rarely comfortable to fire.

With the X.D.S. 45, it’s a combination of it being a subcompact pistol, the caliber, and the extremely thin grip. That last quality, which grants it its ergonomic qualities, is also its largest drawback. After firing just fifty rounds, I had to shake my hands a bit to try and lose the stinging sensation. 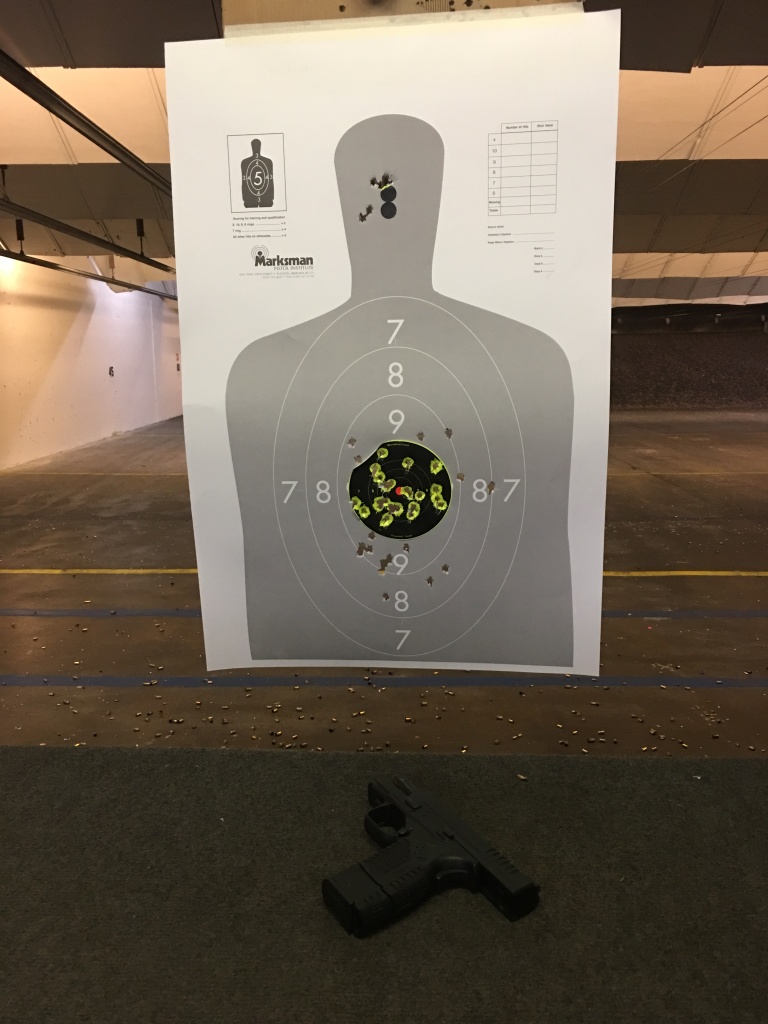 As you can see, at 21 feet (I’m not sure I personally would engage somebody beyond 21 feet with a subcompact pistol…some may disagree with this), all of my rounds are in the 8 ring or better, and my worst shot was just on the 8 side of the 8/7 border. All of my headshots were on target and fairly tightly grouped.

The X.D.S. 45 shoots well, without question. Even with my discomfort, I was able to perform adequately.

Having said that…it is very uncomfortable to shoot. While being uncomfortable is not an impediment to a trained shooter, it certainly does not hurt to have a pistol with which you’re comfortable.

I would like to give a full-sized X.D. a shot to see how it handles, and I’d also like to see if comfort is an issue with an X.D.S. 9.

As for the X.D.S.: if you can get past the stinging feeling when you fire it and you’re looking for a subcompact .45ACP, it performs.

Me? I don’t see myself rushing out to buy one anytime soon. I’ll probably just stick to my Glock 26 for my subcompact needs.