As part of the lead up to NaNoWriMo 2018, I’ve been sharing tips that have helped me as a writer over the years.

One of the biggest pet peeves I’ve encountered in popular media is when it’s clear that the writers are winging a character’s background. Inconsistencies and paradoxes are signs that they didn’t give the character much thought going into it.

A great example is from a show I love, 24. In the earlier seasons, the show’s website had character biographies to provide added insight for the viewer.

Jack Bauer’s bio showed him being 36 at the time of Season 1 (if The House Special Subcommittee’s Findings at CTU are to be considered canon, and they do line up with the website’s bio), with a bachelor’s degree from UCLA, a master’s from UC Berkeley, experience as an LAPD SWAT officer, and having served with the Army’s Special Mission Unit as a Captain.

The inaccuracy of the last part aside (something I delve into here), let’s break this down.

It takes 6 years total to earn a bachelor’s and master’s degree. Let’s be generous and say Jack went to college at 17. He’d be 23 when he graduated.

Then he’s commissioned into the Army. Officially, officer applicants for the Unit must be at least O-3 and airborne qualified. Realistically, they need a few deployments underneath their belt. On average, it takes 4 years to make O-3 in the Army, but we’ll be generous and say he got promoted ahead of peers and made it in 3.5. So, that means he’s 26.5 when he gets picked up for the Unit, and that’s assuming he passes Selection and OTC on the first time go.

So, there’d be 10 years for Bauer to go from an O-3 Unit operator, to an LAPD SWAT officer (which takes at least five years on the street before he can apply), to a CTU agent, to the head of the CTU Domestic Unit in Los Angeles.

To become a Special Agent in Charge means you’re a member of the Senior Executive Service. That usually takes at least 15 years of work with your agency to attain. So, even if Bauer got to the Unit, decided, “Meh, not for me,” and quit and joined LAPD immediately afterward, did the same thing with SWAT, then joined CTU, he’d only have five years of CTU experience.

Later seasons of the show seemed to ignore the official dossier (and the dossier was removed from the site) in lieu of winging it with whatever was convenient for the plot at hand.

My point is: it’s not enough to just do your research. You should keep your research pertaining to a character in a log for quick reference. Enter the dossier.

Components of the Dossier

I’ve been using my dossier format, with a couple of tweaks, since 2002. It’s inspired by the character bios I saw while playing Tom Clancy’s Ghost Recon. The basic components are:

Vital statistics: This includes name, rank/position, height and weight, gender, hair and eye color, and distinguishing features. In the distinguishing features section, I usually include tattoos, scars, piercings, particular articles of clothing they frequently wear, and whether or not they smoke or drink and in what brands they partake.

History: This is the meat and potatoes. Parents and occupation, siblings and occupation, early childhood, adolescence, and adult life. This should lead the writer right up to the moment we meet the character for the first time. I get extremely detailed. Marriages, divorces, childbirths, major losses, major job events. Include it all.

Character personality: This is the soul of the dossier. What are they like at work? What do they do in their spare time? How are they inclined politically? Are they religious? What’s their sexual orientation and activity level? What kind of music do they jam out to? This section here requires a lot of thought. This will shape everything your character says and does.

Work history: I mostly include this as a quick reference. If I wanna see what my character was doing in 2012, I won’t scroll through the history unless I’m looking for a specific incident. I go to the work history.

I’ve also since added “military education,” “civilian education,” and “skill sets and certifications” as sections for quick reference. Obviously, this would be genre-dependent. Since I write in the tactical action/adventure/thriller genre, my dossiers have a government-type feel to them. If you’re writing a historical fiction or a fantasy piece, feel free to not be as rigid with it and get flowery with it, as long as you can reference it as you go. 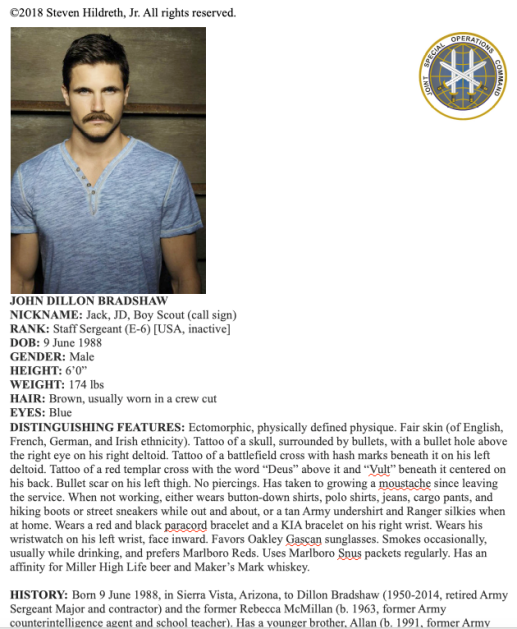 I’ve heard that many of these fancy writing apps have features that allow you to do this sort of thing. If that works for you, fantastic!

I’m attaching my long-form dossier template for any writers that would like to use them. Feel free to run wild using them in your works. Just remember to remove the copyright header and put your own name there!